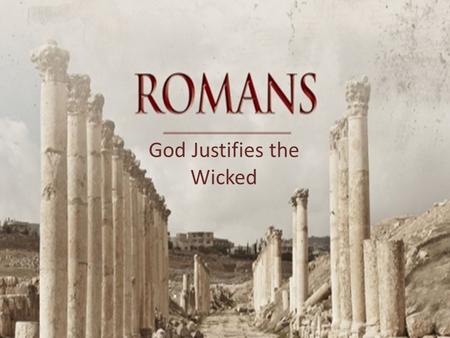 “God, who justifies the wicked…” What an amazing phrase…justifying the wicked. How does that even happen? How can it even happen? God is the One who declares that all judges should always condemn and never acquit (justify) the wicked. In fact, God Himself declares, “I will not justify the wicked” (Exodus 23:7, KJV).

Romans 1:8 – which we have already studied – describes God as directing His wrath toward all human wickedness. But here it is. Right here in black and white. Romans 4:5 says clearly that God does justify the wicked. How can this be?

Justifying the Wicked is An Amazing Statement

F. F. Bruce, a Christian commentator on Romans, says this statement “is so paradoxical as to be startling – not say shocking” (Romans, p. 106-107). This seems so counter to the God many would have come to know, especially the Jews. But that is exactly the point – that is the point of grace – it is different. In fact, it is the exact opposite of law. Under law, God is restricted from justifying the wicked. Not so under grace.

Paul quotes from Psalm 32 – a psalm of David – showing that this teaching is not at all “new” or inconsistent with the Old Testament. He combines David’s words with the example of Abraham. Doing so he shows the continuity of salvation by grace through faith.

There are several phrases used in these verses – used in fact throughout this section – Romans 3:21-4:8. The parallelism is remarkable. Why is it here? Because it provides a means for determining exactly the point Paul is trying to convey. We should never try to understand “justification by faith apart from works” without considering this quote from David.

Study Romans from the Beginning by Clicking Here