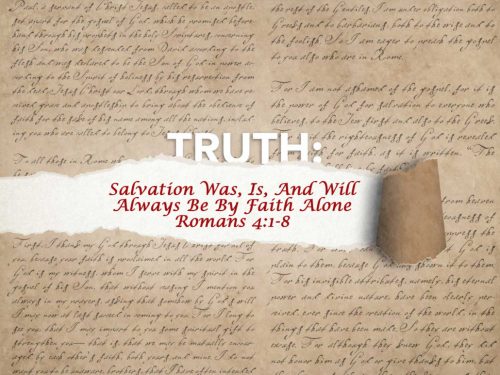 Abraham’s faith was credited to him as righteousness (Genesis 15:6). It was not his works of law that resulted in his salvation. As is the case today, salvation always is, always has been, and always will be, by grace through faith. Therefore,Paul goes back to the beginning of “our” faith to the call of Abraham, and presents him as the illustration of salvation by grace. As a result, the point is made that anyone who has ever been saved has been saved by grace.

Abraham As A Paradigm of Grace

The whole of Romans 4 is a presentation of Abraham as the primary example of salvation by grace through faith. Appealing to Abraham has several goals.

First, Abraham is the patriarch of the Old Testament (OT) and the Jews. He is considered both the father of the Jewish nation and the spiritual father of the faith. This definitely gets and holds the attention of those of Jewish decent. Abraham’s faith is crucial.

Second, it provides OT confirmation and continuity with Paul’s teaching. Not that Paul is seeking mere “scriptural proof” but he is showing the consistency of the teaching of salvation by faith. The goal is to help Jews accept the gospel of grace. Again, Abraham’s faith is the focus.

A Comparison of Systems

Throughout chapter four, Abraham’s faith plays the prominent role. Even “father Abraham” was saved by his faith and not by his works of law. In his case, he did not even yet have the Law of Moses. In fact, as we will see later, Abraham became the father of our faith before he was circumcised. Meaning, he was saved as a gentile, not as a Jew.

Paul compares and contrasts the law system for salvation and the grace system of salvation. Using Abraham as his example, Paul clearly shows these differences in relating to God. First, he contrasts faith with works (4:1-8), then faith with circumcision (4:9-12), and then faith with law (4:13-22). All using Abraham’s faith as the perfect example.

Of course Abraham served God and was (mostly) obedient to His law. But he was not perfectly obedient. Therein lies the problem. As we have learned, obedience to God’s law is required. Even for those under grace. However, salvation has always been by faith and not by keeping the law.

This Series on Romans Begins With Episode #69